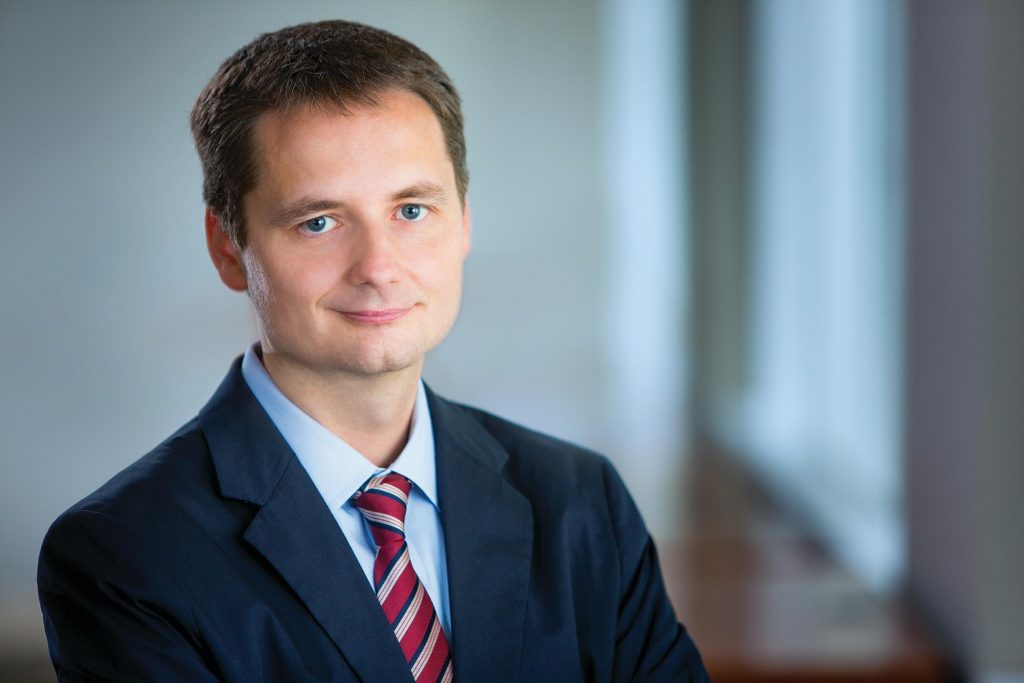 Given the rapid growth in and importance of harnessing health data as a tool, Mary Klotman, MD, Dean, Duke University School of Medicine, recently announced the key leadership appointment of Michael Pencina, PhD, Vice Dean for Data Science for the School of Medicine, as the Director of Duke AI Health effective October 13, 2021. Designed as a multidisciplinary initiative, AI Health intends to unlock the enormous opportunity to spur collaborations that will leverage knowledge and expertise from across campus. 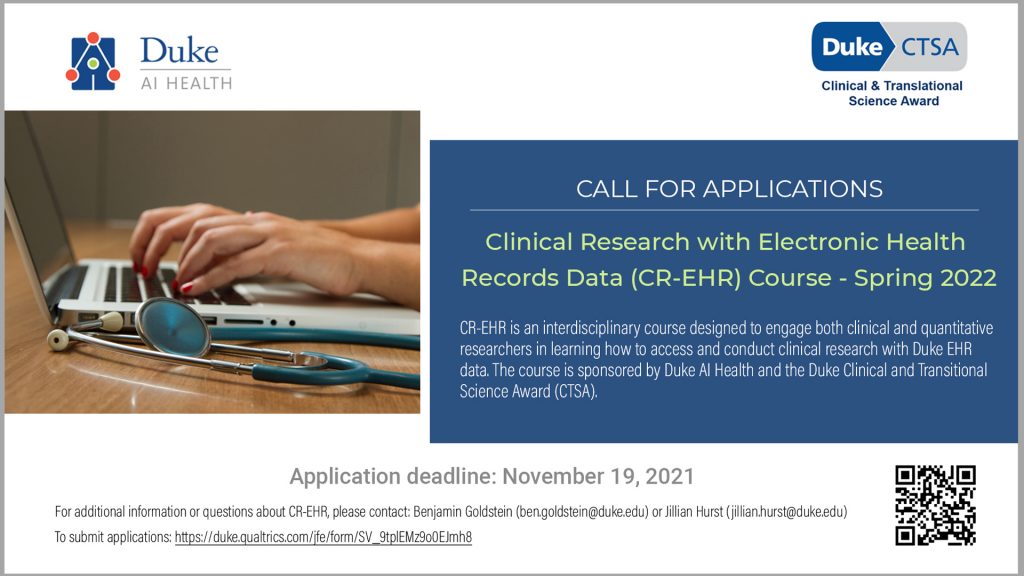 Duke AI Health and the Duke Clinical & Translational Sciences Institute are pleased to announce a call for applications to the Spring 2022 Clinical Research with Electronic Health Records Data (CR-EHR) Course, with a November 19, 2021 application submission deadline. CR-EHR is an interdisciplinary course designed to engage both clinical and quantitative researchers in learning how to access and work with Duke EHR data. Data captured in the Duke EHR represent the broad spectrum of patient care delivered by Duke Health, which can be leveraged for a variety of research questions and study designs. Clinical trainees will develop a deeper understanding of the types of analytic studies that can be conducted with EHR data, while quantitative trainees will develop a deeper knowledge base for how to query and process EHR data. 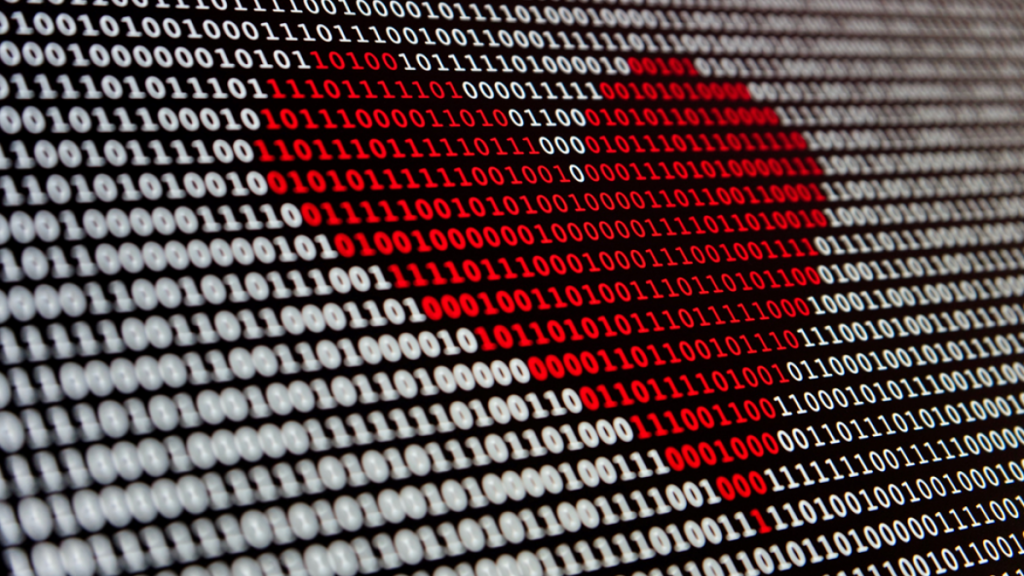 Now more than ever, clinicians can access an incredible amount of data about their patients. Electronic health records (EHRs) offer a massive repository of information about each individual: notes of all kinds, laboratory results, imaging data, scanned forms, and saved images. Soon, we may even be able to add data from wearable devices such as personal fitness trackers into the mix. However, this breadth of information can be both a blessing and a curse. Clinicians can learn more about their patients from the medical chart than was previously possible—but only if they are able to rapidly and accurately sort through that information and find the most relevant points for a given clinical encounter. 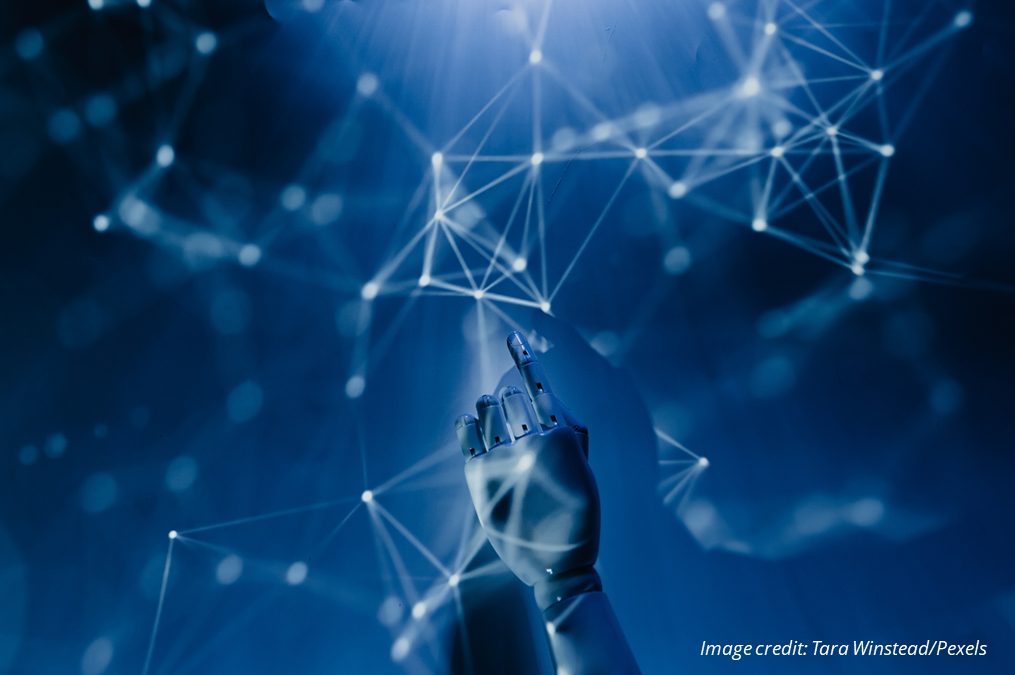 This December, Duke AI Health Director and Professor of Biostatistics and Bioinformatics Michael Pencina will join a group of experts for a panel discussion hosted by the Duke Alumni Forever Learning Institute called “Artificial Intelligence: Capabilities, Liabilities, and Responsibilities.” The discussion, the final installment in a four-part series taking place this fall titled “Artificial Intelligence: Real Ethical Quandaries,” will focus on the expanding role of artificial intelligence in decision-making and the practical and ethical issues that can arise from the use of a technology whose inner workings are often opaque and whose operations can be affected by built-in biases. Panel participants will examine how these technologies are being used in arenas such as medicine and national security and discuss the potential impacts of these tools, both positive and negative, on people’s daily lives. The session will take place as an online Zoom webinar on Tuesday, December 7, 2021, from 3:00-4:00 PM Eastern time, and will be moderated by Duke Law Professor and Director of the Duke Initiative for Science and Society Nita Farahany. 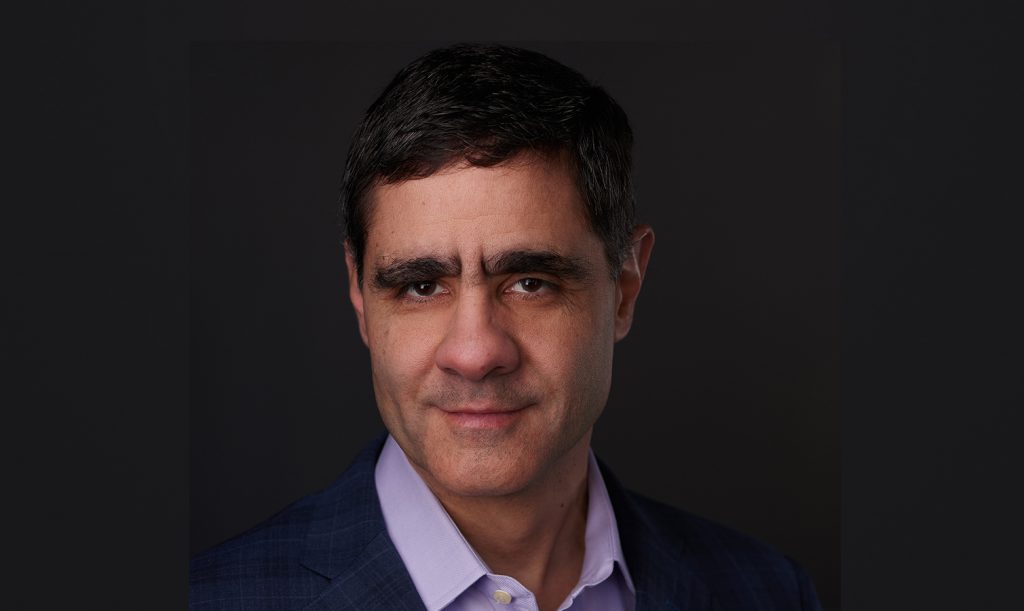 Eric Perakslis, PhD, DCRI’s Chief Science & Digital Officer, will present at DEF CON 2021 in a talk called “Truth, Trust, and Biodefense.” Learn more about his presentation in his blog post for the DCRI below:

“On May 12, 2017, a ransomware cyberattack known as WannaCry was launched. Within a day, it was raging worldwide and had infected tens of thousands of computers and electronic devices belonging to the United Kingdom’s National Health Service, causing severe disruptions to hospital operations. Shortly after 15:00 UTC on May 13, the infection was halted when information security researcher and hacker Marcus Hutchins discovered and exploited a “kill switch” embedded in the malware’s code. In addition to greatly slowing WannaCry’s spread, this kill switch also prevented infected computers from being encrypted and their data locked.  Marcus Hutchins’ story is notably complex, but there is no denying that his actions greatly decreased the global harm that likely would have otherwise occurred. The term hacker often brings to mind a faceless, hooded figure that is ubiquitously linked to crime. Given how pervasive this image is, it may surprise some to learn that there are many “good” hackers. This distinction is made especially clear in the viral TED Talk given by cybersecurity Keren Elazari titled “Hackers: the internet’s immune system.” In this talk, Elazari argues that hackers make the internet stronger by testing its defenses, which forces the internet to adapt, improve, and strengthen, not unlike the body’s adaptive immune system.

Duke AI Health Director Michael Pencina, PhD, who is a professor of biostatistics and bioinformatics at Duke and serves as the medical school’s vice dean for data science and information technology, was recently quoted in an article appearing in STAT News examining the use of commercially developed predictive algorithms in medicine. In an investigative report for STAT News, correspondent Casey Ross spoke with employees in multiple health systems across the country that use clinical algorithms created by Epic, one of the nation’s largest electronic health record vendors. 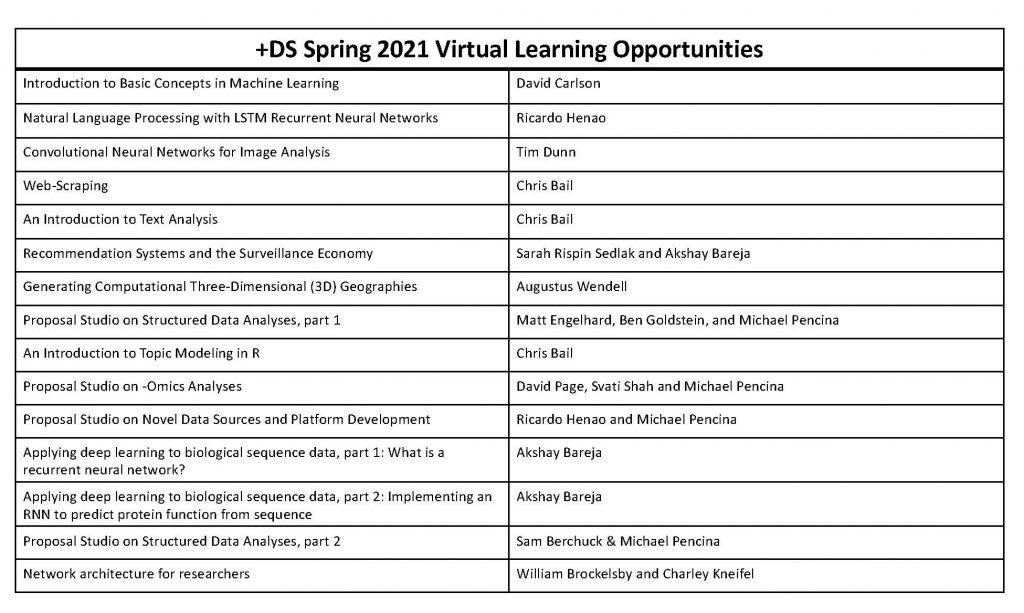 Duke+DataScience (+DS) is a Duke-wide educational initiative devoted to expanding knowledge of and facility with machine learning and other artificial intelligence tools across multiple academic fields, including the arts, humanities, and social sciences as well as medicine and quantitative sciences. With an extensive and growing curriculum that includes both online and in-person courses in neural networks, natural language processing, deep learning, and other machine learning applications, +DS offerings span learning needs ranging from novice to expert and are tailored to specific academic and professional applications. 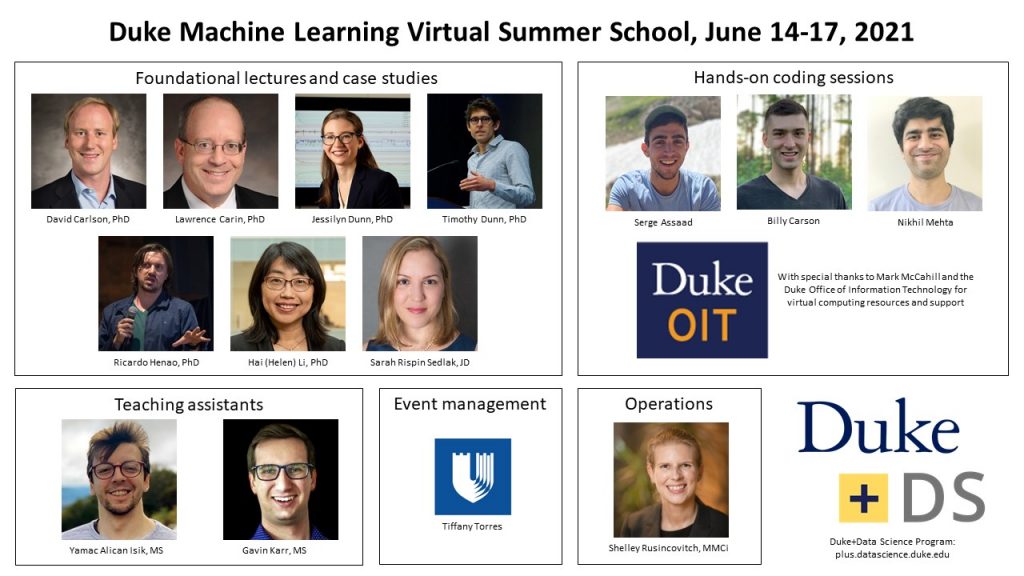 Duke’s +Data Science (+DS) recently concluded its 2021 Machine Learning Virtual Summer School (MLvSS). This event, the ninth machine learning school held since 2017, sold out more than a month in advance and completely filled a 100-person waitlist. This high demand reflects both the substantial demand for instruction in methods driving the rapid growth in artificial intelligence, as well as a keen interest in tapping into high-quality instruction from Duke teachers with expertise in the mathematics and statistics that underlie modern machine learning methods. 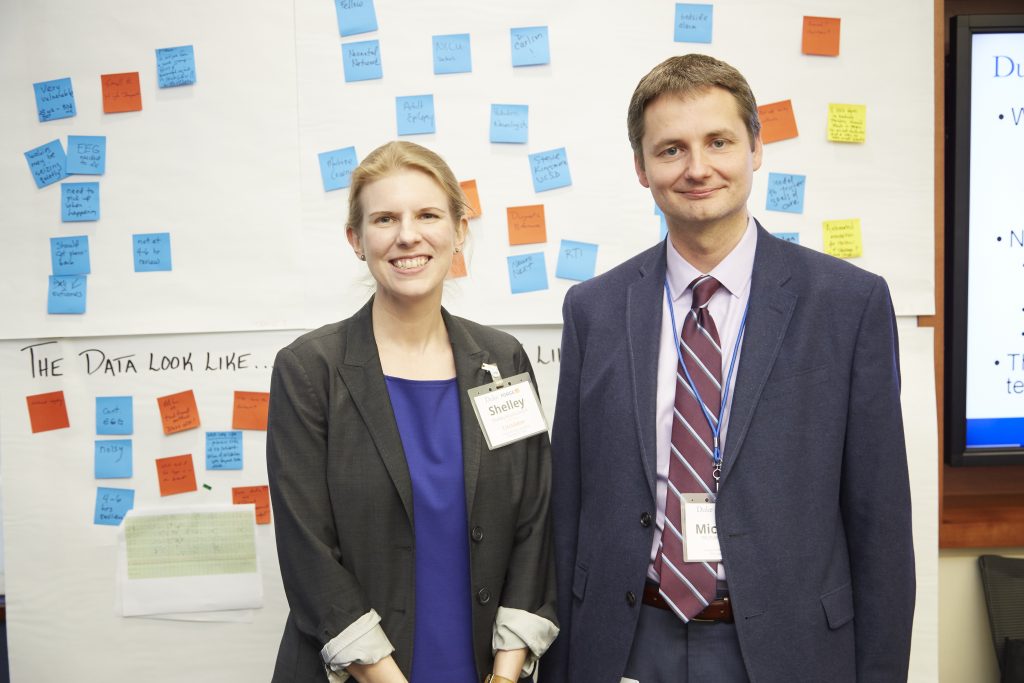 Keeping up with the pace of research in health data science is challenging at the best of times, and the COVID-19 pandemic has not made things any easier. For this reason, Duke AI Health and the Duke +Data Science (+DS) program worked together this spring to launch the Proposal Studio Virtual Learning Experiences (vLE). The Proposal Studios sessions were designed to help investigators develop effective, successful proposals for research project involving health data science. From March through April of 2021, +DS held four successful proposal studios, assisting 13 investigators to develop scientific proposals. Open to anyone within the Duke community, the series attracted a total of 129 attendees and averaged 32 audience members per vLE. 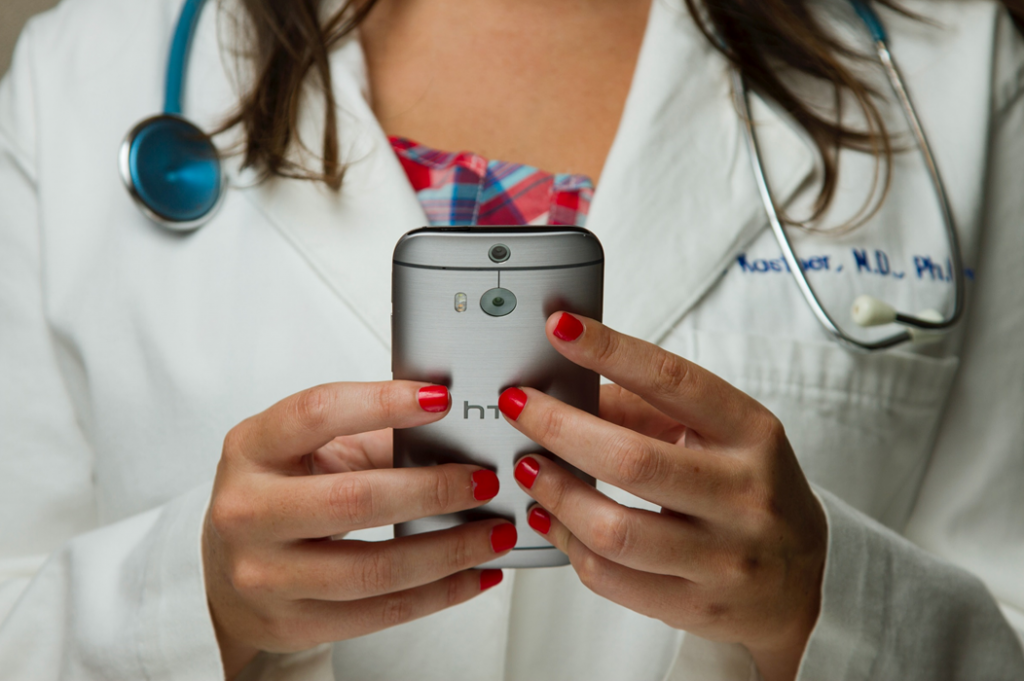 The COVID-19 pandemic has prompted a surge in demand for telehealth services, but many questions about how healthcare providers can adapt their practice to meet the challenges of telemedicine remain to be answered. Now, a group of rheumatologists at Duke University School of Medicine have used data drawn from the Duke University Health System’s EHRs (electronic health records) to investigate how a rapid transition to telemedicine affected their approach to patient care.